Management of upper respiratory tract infections by different medical practices, including homeopathy, and consumption of antibiotics in primary care: the EPI3 cohort study in France 2007-2008. 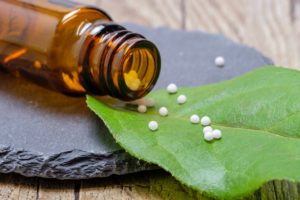 The EPI3 survey was a nationwide population-based study of a representative sample of 825 GPs and their patients in France (2007-2008). GP recruitment was stratified by self-declared homeopathic prescribing preferences. Adults and children with confirmed URTI were asked to participate in a standardized telephone interview at inclusion, one-, three- and twelve-month follow up. Study outcomes included medication consumption, URTI symptoms’ resolution and potentially-associated infections (sinusitis or otitis media/externa) as reported by patients. Analyses included calibration to account for non-respondents and groups were compared using multivate analyses adjusting for baseline differences with a propensity score.

Patients who chose to consult GPs certified in homeopathy used less antibiotics and antipyretic/anti-inflammatory drugs for URTI than those seen by GPs prescribing conventional medications. No difference was observed in patients consulting GPs within mixed-practice. A non-statistically significant excess was estimated through modelling for associated infections in the GP-Ho group and needs to be further studied.

This website uses cookies to improve your experience while you navigate through the website. Out of these cookies, the cookies that are categorized as necessary are stored on your browser as they are essential for the working of basic functionalities of the website. We also use third-party cookies that help us analyze and understand how you use this website. These cookies will be stored in your browser only with your consent. You also have the option to opt-out of these cookies. But opting out of some of these cookies may have an effect on your browsing experience.
Necessary Altid aktiveret
Necessary cookies are absolutely essential for the website to function properly. This category only includes cookies that ensures basic functionalities and security features of the website. These cookies do not store any personal information.
Non-necessary
Any cookies that may not be particularly necessary for the website to function and is used specifically to collect user personal data via analytics, ads, other embedded contents are termed as non-necessary cookies. It is mandatory to procure user consent prior to running these cookies on your website.
GEM & ACCEPTÈR